KalleWheel is a Photoshop extension that is made to make it easier for digital painters to choose colors in Photoshop. The extension is available on the Adobe addons website.

The main reason to why I made this Photoshop extension is based on the topics discussed under Color changes due to different light sources.

Here are some details on how my extension solves some of the problems:

The HCL color space is directly derived from the CIELab color space which is made to reduce the interference our human perception have with the colors percieved. Comparing to the most common color space used by digital artists (HSB: Hue, Saturation, Brightness) a certain lightness will be percieved equally light (almost) independent on the other two light components. An example of this is when comparing a yellow color to a blue color. Even though the brightness (in HSB color space) is equal, the yellow color will seem brighter due to the pixel intensities of a screen as well as the way we percieve the colors. In CIELab color space however, a yellow color with a certain lightness will seem roughly as light as a blue color with the same lightness. 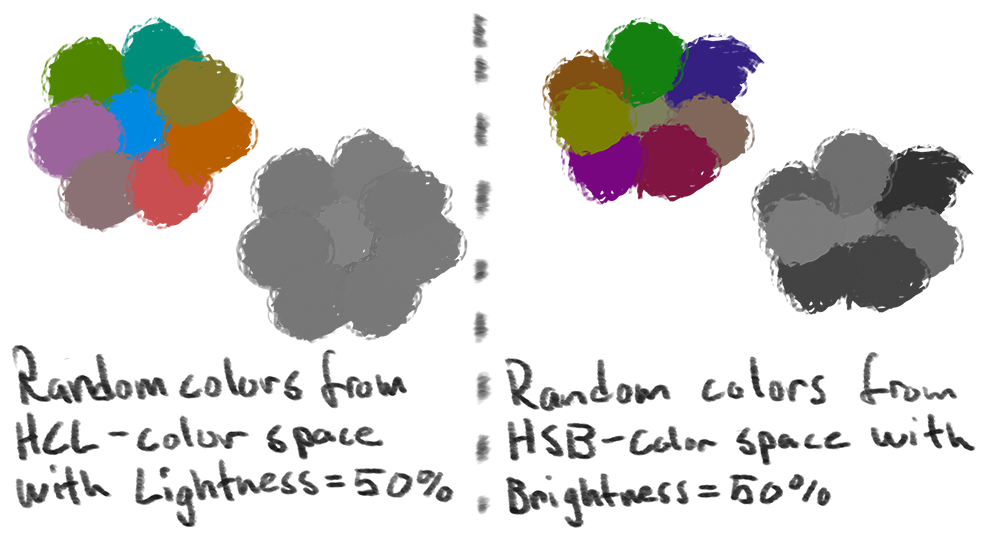 Photoshop actually uses the CIELab colorspace when converting to grayscale, which also has to do with why the grayscale image to the right seems to have more diverse lightness between colors. But looking only at the color versions of the images above it is quite clear that the HCL color space better preserves the lightness of the colors.

Many colors in the same picker wheel

Photoshops default color picker does not allow the user to have many colors on the same picker and only change one of them at the time. The default picker only changes the active color which can be the background color or the foreground color of Photoshop.

There is a standard extension that comes with Photoshop called Adobe Color-themes (formerly Kuler) which KalleWheel is roughly based on. Adobe color themes lets you define up to five dependent or independent colors. Adobe Color-themes, however, is not made for picking colors for painting but rather to create color themes for graphical applications or similar. I stripped away the things that I did not need from Adome Color-themes and added the things that were more important, for example more color swatches. Currently you can define twelve colors on the wheel at the same time. So far I have never needed this many colors but it is nice to have in case.

The greatest advantage of having the Hue and Chroma light components on a 2D surface where Hue is directly dependent on the angle and Chroma goes from low in the center of the circle to high for bigger distances; is the possibility to take advantage of the fact that Hue and Chroma are not independent when it comes to the colors of illuminated real world objects. Using the standard Photoshop color picker with Saturation and Brightness orthogonal on a plane and Hue on a slider it is so much harder to transition for example from a pink to a green color by shifting two independent sliders (green and pink are opposite each other on the color wheel). Using the type of color wheel as KalleWheel or Adobe Color-themes are using, this is a much easier task. Just drag the "color dot" from the pink towards the green on the circle; no need to handle two independent controllers.

This was actually the reason I started to paint using the Adobe Color-themes extension and eventually decided to build my own extension.

What is possible in KalleWheel that I have not seen in any other color picker is to define light source colors and then see how different colors are affected (shifted) by these light sources. This is done by displaying lines which are directed in the direction of the light source (As mentioned before, that theory can be found here: Color changes due to different light sources, this is written before i made KalleWheel). The tool is just made to be used as a guideline but actually helps when picking colors for illuminated objects when painting digitally. Other "improvements" compared to Adobe Color-themes

Here I list some more differences between KalleWheel and Adobe Color-themes, considering KalleWheel is more directly made as a painting tool and not a color theme creator.

The extension is available on the Adobe addons website. Installation can be done if you have Adobe CC installed.

If there is still issues on installing, try following the instructions for manual installation on this page.

Any question about this?